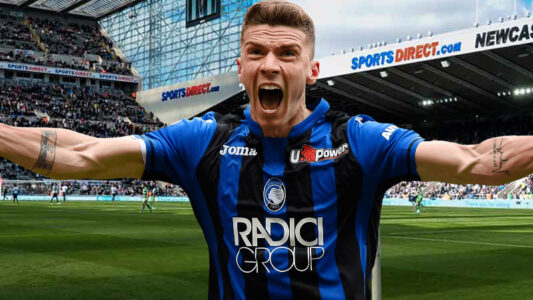 Robin Gosens has agreed personal terms with Newcastle, and he’s willing to join the Tyneside club this month

After months of speculation and rumours, the Toon board have been making moves this transfer window and have already added Kieran Trippier and Chris Wood to the squad in deals worth a total of £37 million

But there is still a feeling that Eddie Howe needs to keep improving the squad if they are to stay in the Premier League this season, and adding a few more top players is what the board need to do over the next few weeks

And according to reports on the Sky Italy website, Newcastle have now agreed Personal terms to bring Gosens to the Premier League

The report also adds Gosen has been offered a three and a half year contract (that’s through summer of 2025) for €3.5M net per season, and that is almost 3 times what he currently earns.

It is also claimed that Newcastle have not yet agreed terms with current club Atalanta.

The Toon are the richest club in world football and should be buying players that will improve the squad. Gosens is a proven defender that has played at the top level and would add to that back-line

It is clear that Newcastle will go down if they do not sign the players that will make a difference, so fans will be hoping that Gosens is heading to the club as we said, he would be a great signing for the club

YOU MAY HAVE MISSED: Former Newcastle player Geremi announces he would love to see £65 million bargain at the Magpies