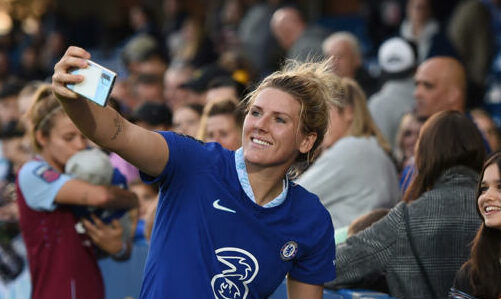 Millie Bright has warned her Chelsea team-mates that they need to be ready for the challenge of Spanish giants Real Madrid in the Champions League.

Bright is easily one of the best defenders in the Womens Super League and is one of the main reasons why the club are sitting top of the table after an impressive start to the season.

But attention is turning away from the WSL this week as they look to continue their impressive start to the Champions League season with a win over Madrid.

They are currently fifth in their domestic table and lost ground in the group when they walked away from PSG with a 0-0 draw – but despite all that – Bright has sent a clear warning to her team-mates.

‘Most importantly, everybody is enjoying their football and playing with smiles on our faces, proving that we’re here for business.

‘Each season we want to progress and we want more trophies but we know there’s a process in that. We’re really excited.’

‘Aggressive, great energy, great attacking presence,’ she replied when asked about what to expect from Real.

‘We take it game by game. We want to keep showing our dominance, keep progressing as a team, but ultimately get the job done, get the win and keep proving ourselves in Europe.’

Chelsea Women are flying right now and will need to be top of their game to fend off a feisty Real Madrid side.

Read More: Midfielder Cuthbert is adapting, thriving and feeling at home at Chelsea after signing deal