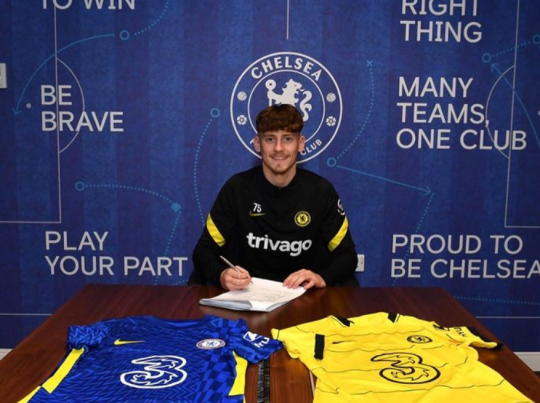 New Chelsea signing Dylan Williams is understandably thrilled to make the leap from Championship strugglers to champions of Europe.

It has been no secret that Thomas Tuchel has been keen to add a new left-back to that Chelsea squad after the injury to Ben Chilwell, which will keep him out for the rest of the season.

And that has left to many reports that some of the games best left-backs could be making their way to the club, but with no deals happening, Chelsea have made the decision to bring Williams to the club.

The 18-year-old left-back has made just eight first team appearances for the Rams, six of which have come in the Championship, but has clearly done enough to catch the eye of the Premier League giants.

And after sealing his move to Stamford Bridge, Williams took to social media to announce his delight at the move to the Champions of Europe, He wrote on Instagram: ‘Wow. I am absolutely delighted to have signed for one of the biggest clubs in the world.

‘Thankyou so much for everything the staff and players have done @dcfcofficial . I cannot wait to get started @chelseafc.’

Derby manager Wayne Rooney, who gave Williams his senior debut, said that he could not bring himself to stand in the teenager’s way of such an enormous move.

‘We have agreed on a fee with a Premier League club, still getting finalised as we speak, for Dylan Williams,’ Rooney said over the weekend.

‘It is one where I felt I couldn’t deny him the opportunity, so that is my decision, not an administrator’s decision.

‘It was my decision after speaking to the player, I felt I couldn’t deny a young lad an opportunity of going to play in the Premier League.’

We have not seen the lad play much but he clearly must be talented and it will be interesting to see just how much game time he gets under Thomas Tuchel.

YOU MAY HAVE MISSED: Chelsea told £100m man will be interesting signing, Blues make contact with Ligue 1 star, board sent message about the possible arrival of World Cup winning midfielder