Conte reacts to possible Arsenal signing after bid accepted, Brazilian tipped to succeed at Arsenal after Edu meets agent and £136m man told to get out of Barca now 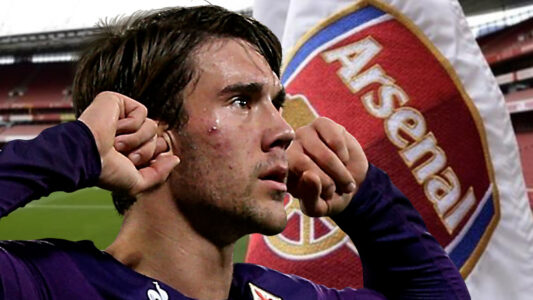 They claim that Arsenal will pay an initial fee of €80 Million up front, with another €26 Million in potential add-ons and bonuses.

Spurs and Arsenal recently had their London derby cancelled as the Gunners could not get a squad together, and the next time they meet, the Gunners could have one of the most deadly strikers in the game leading their attack.

Asked about Arsenal’s interest in Vlahovic – and the possibility of him playing against Tottenham this season – prior to Spurs’ dramatic win over Leicester, Conte replied: ‘I don’t like to speak about players of other clubs.

‘Also, even if other clubs are interested in these players, we have our own problems to solve. We have to focus on ourselves, it’s the best way to move forward.’

It is no secret that Conte is a fan of Vlahovic and would probably like him in that Tottenham squad. So he will not want to be facing the big man if he does actually join Arsenal.

But with only 10 days to go until the end of the transfer window, will the Gunners get this deal done?

Arsenal-linked Juventus midfielder Arthur Melo has been backed to succeed under Mikel Arteta after Edu met with the players agent to complete a deal.

The Gunners are desperate to sign the Brazil international in the January transfer window, and And Edu was reportedly wooing the midfielder’s representative Federico Pastorello at the club’s London Colney training ground in order to push through a deal, according to Metro.

The north Londoners’ manager Mikel Arteta wants to strengthen in the middle of the park despite Thomas Partey’s return from the Africa Cup of Nations, as he is lacking players in key areas of the pitch.

And ahead of his potential move to the Emirates, South American football expert, Tim Vickery has opened up and admitted that despite his troubles at Juventus, Arthur could be a good signing for the Gunners.

He Told TalkSport: “In the last decade Brazilian midfielders have really struggled when they’ve come to Europe,” Vickery said. “They’ve struggled with the extra speed in which you have to do things.

“Arthur was the biggest of all the big hopes, we thought he was made to measure for Barcelona and when he went there it didn’t go badly, there was a very impressive performance against Tottenham at Wembley.

The midfielder has only played seven Serie A games this season under Massimiliano Allegri with the arrival of Euro 2020 star Manuel Locatelli complicating matters.

Vickery though believes that despite things faltering on and off the field, Arthur still has what it takes to reach the top.

“I’m told by people far closer to this than I am that his life off the field hasn’t been as disciplined as it should be,” he said. “But I would hope that there’s a player there because I love his ability to receive the ball and keep possession.

“I would love, even if it’s at Arsenal, to get him playing his football because he’s the kind of player that Arteta would like and it would be lovely to see him fulfil his potential.”

Arsenal linked Ousmane Dembele has been told to leave Barcelona as soon as possible by club chief Mateu Alemany.

Dembele has greatly frustrated since arriving at the Camp Nou. Due to a combination of both poor form and persistent injuries, he has made just 126 appearances for the Spanish giants, scoring 30 goals

However, there has been some shock speculation in the media that as number of Premier League clubs, including Arsenal, may be open to the idea of bringing him to the Premier League in order to add a bit more of a goal-threat to that Attack.

It has been believed that Dembele has not agreed a new contract with the Spanish giants, despite the fact they wanted him to stay, and that is why a number of clubs have been eyeing up a potential deal.

Now, that the 24-year-old has refused to renew his contract, Director of football Alemany has opened up and told the Frenchman that he needs to leave the Spanish giants as soon as possible

He said: “We understand Dembele’s decision is to not continue (at Barça) and we’ve communicated our decision (to leave him out),” Alemany said.

“We want players that are committed to the club and we have told him he has to leave the club as soon as possible.

“We started talks in July. We have made several offers, which were all rejected. He has been told that he must leave the club, he is not committed to the project.”

Look, Dembele is a man that has struggled in La Liga, so coming to the Premier League and making an impact, will not happen. He is not built for the English game

Arsenal do not need to add injury prone players to the squad, so they SHOULD NOT make a move for the man