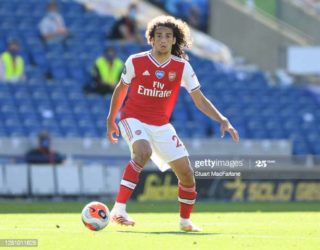 BRIGHTON, ENGLAND - JUNE 20: Matteo Guendouzi of Arsenal during the Premier League match between Brighton & Hove Albion and Arsenal FC at American Express Community Stadium on June 20, 2020 in Brighton, England. Football Stadiums around Europe remain empty due to the Coronavirus Pandemic as Government social distancing laws prohibit fans inside venues resulting in all fixtures being played behind closed doors. (Photo by Stuart MacFarlane/Arsenal FC via Getty Images)

The France international recorded five goals and 14 assists across 55 appearances for Jorge Sampaoli’s side last season, helping them finish second in Ligue 1

And he had no intention of making a move back to Arsenal this summer and made sure that he secured a permanent move to Marseille – and they have paid just over €11 million for Guendouzi including the €850,000 loan fee they paid upfront for his services last summer.

The 23-year-old has committed to a three-year contract at Stade Velodrome that will see him remain at the club through to the end of the 2024-25 season.

And GOAL’s Arsenal correspondent Charles Watts has told the fans that the club are happy to see the back of the player: “It all started so well at Arsenal for Guendouzi. I remember sitting in National Stadium in Singapore watching him announce himself in sensational style during his debut against Atletico Madrid in the summer of 2018.

“He’d arrived as a relative unknown teenager from Lorient, yet was dominating the midfield battle against Diego Simeone’’ side. That’s how things went for Guendouzi during the first part of his Arsenal career. He was a key man under Unai Emery, but everything changed once Mikel Arteta came in.

“Everyone points to the incident with Neal Maupay at Brighton as the moment that signalled the end of his Arsenal career, but it wasn’t just that spat after full-time; it was how things went in the days that followed that did for Guendouzi in north London.

“Arteta and the club hierarchy were far from happy with his manner during the in-house disciplinary talks, and this all came on the back of the disagreement between Guendouzi and Arteta during a Dubai training camp which saw the midfielder left out of a game against Newcastle in February 2020.

“There was clearly just a clash of personalities between the player and manager and there is only ever going to be one winner in that situation – unless the player is something truly special.

“While Guendouzi is certainly a talent, as he has shown with Marseille, he is not the type of player who a club will side with over a manager. So this move suits all parties, although fans will justifiably think they could have got a much higher fee for the France international.

“Arsenal will just be happy Guendouzi has gone, however, and that everyone can now move on after a transfer that started well, but descended into a bit of an ugly mess.”