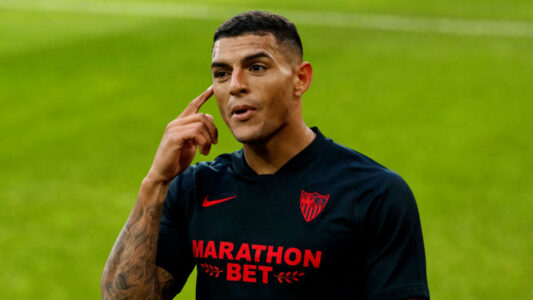 Eddie Howe hopes to bring in two centre-backs before the January window closes, as he looks to shore up a back line that has conceded 43 Premier League goals in just 20 games, and Carlos is a man that is high up on the shopping list.

The Magpies have made a £28million offer for the Sevilla defender, an offer that is being consider by the Spanish side, and there have been many fans out there that have been getting excited about his possible arrival

However, South American football expert Tim Vickery told talkSPORT there are real concerns about the Brazilian, and has warned the Toon fans that they should not be getting too excited about the possible arrival of Carlos

Vickery said: “It was a couple of years ago that a Brazilian journalist, based in Spain, brought my attention to Diego Carlos and said ‘I think this is the best Brazilian centre-back in Spain, have a look at him’.

“My conclusion, and he won the Olympic gold medal as well, is that we may be dealing with a centre-back who may look better than he is.

“Russell Osman syndrome, maybe? Remember him and Terry Butcher together? Everyone thought Russell Osman was the class act and then you threw him in the deep end and you found out that Osman looked better, but Butcher was much better.

“I worry about Diego Carlos. There are moments when he looks classy, but there are lots of mistakes and wild man things.”

Carlos plays alongside Joules Kounde at Sevilla, and that is why he looks so good. It wasnt too long ago that Liverpool were eyeing up a move, but after watching him for a number of months, they did not make a move

If Howe wants to add some defenders to the back-line, why not add some already proven in the Premier League?

ALSO CHECK OUT: Another signing on way after Newcastle ‘agree personal terms’ with German International